By ANDREAS PAVLOU and HALEY WEISS
September 13, 2017 at 11:53 am
Credit: Christina Piasecki

34th Street Magazine is part of a student-run nonprofit.

Please support us by disabling your ad blocker on our site.

Though guards are a constant fixture at resident hall entrances, most students tap their PennCards without glancing at the people behind the help desk. Street asked two intrepid reporters to observe one night of freshman activity between 7 p.m. to 7 a.m.—from the perspective of an Allied Barton guard. Andreas Pavlou (C ‘19) sat at the entrance of Hill College House and Haley Weiss (C ‘18) at the Upper Quad Gate. From their side of the desk, guards observe things we never see, and pick up on patterns we don’t notice. Here’s what they saw during one night shift:

I’m armed with Wawa’s largest coffee and I’ve set myself up on the spiffy new couches at the entrance to Hill College House. As I watch freshmen buzzing around the lobby, it sinks in: I’m going to be looking at this scene for 12 hours.

It’s a brief endeavor for me, but it’s the daily reality for the Allied Barton guards who work 8–12 hour shifts at the college houses.

Mrs. A* is the first guard on the night shift.  She’s worked at Penn for 20 years, starting in 1997. She usually works in Gregory, but she’s covering for Hill tonight.

“I’ve seen more people here today than I have all week at Class of ‘25!” she laughs.

But Mrs. A appreciates working in a dorm with fewer students because it allows her to build closer relationships with them. She remembers when students would sign a notebook instead of an electronic pad when they forgot their PennCard. Mrs. A has even kept some of those books full of signatures at home, to help her remember past students.

Security guards have a good memory, Mrs. A explains, but they also notice everything—even if it seems like they don’t.

At 9:00 p.m., the Quadfather arrives. Some know him as Max, others call him “Inspector Gadget.” Whatever his nickname of the month, he’s a legend among dormitory security guards.

Another security guard named Erika starts her shift forty–five minutes later. As she settles in, I ask her why Max deserves such a title. She slaps her hands together, bows down and exclaims: “He’s the Quadfather because he knows everything!”

To Max, his Quadfather title is more than just knowing how to sign in a guest at Upper Quad Gate. It brings with it a responsibility to be kind.

“I want them to feel safe and comfortable with me,” he explains. “It’s their first time at college and they should feel safe. I want them to go home and say ‘I had the best time of my life at Penn.’”

Many students forget to reciprocate his kindness. He does his best to be friendly and helpful, but also ensures that students treat him respectfully. Don’t start at the Quadfather with a question or request. He won’t answer you unless you greet him first.

Erika echoes these sentiments. “I don’t know what it is about this new generation, but some of you have no manners.” And she has a particular pet peeve: students who slide money or cards across the table instead of handing them to her.

But students do change. Max recounts a time when a student returned after graduation and visited the Quad. On his way out, the student apologized to Max for his cold morning demeanor. There were no hard feelings. According to Max, being friendly is part of the job.

I’ve been posted at the gate for fifteen minutes. Terrell, the guard on duty, pauses our conversation to glance over at a girl coming through the gate. She’s wearing a crop top that reads “IT’S LIT” in boxy letters. Terrell turns back to me. “Her shirt spells ‘I just went to Made in America.’”

The guards who work in Penn’s dorms are superhuman. Despite their tedious nocturnal work, I don’t see any of the guards drinking a sip of caffeine.

Forty minutes of drizzle later, a woman with a crossbody satchel suddenly appears at the security station.

“Hi,” she blurts hurriedly. “I’m the GA on duty for Fisher, and I just saw a kid climb over and down into that ladder area over there that leads to the trash.”

She points about 20 feet to the right of the gate, where a fenced–off ladder by the entrance to Morgan Hall leads down to an underground passage.

“I just don’t really know what’s down there or what to do,” she says. “And he was definitely intoxicated.”

“Are you serious?!” hoots Terrell. He follows the GA over to the location she was pointing at.

“Shiiiiit,” he replies. “I didn’t even know you could climb over that fence!”

As Terrell and the Fisher GA debate what they should do about the rogue freshman, Ware’s on–duty GA arrives. After roughly a minute of screaming “HELLO?” into the abyss, it’s determined that Mr. Ware will go down himself to look for the offender.

“I can’t believe I’m doing this,” he mutters as he flicks on his iPhone flashlight. He hauls himself over the fence, and down he goes. 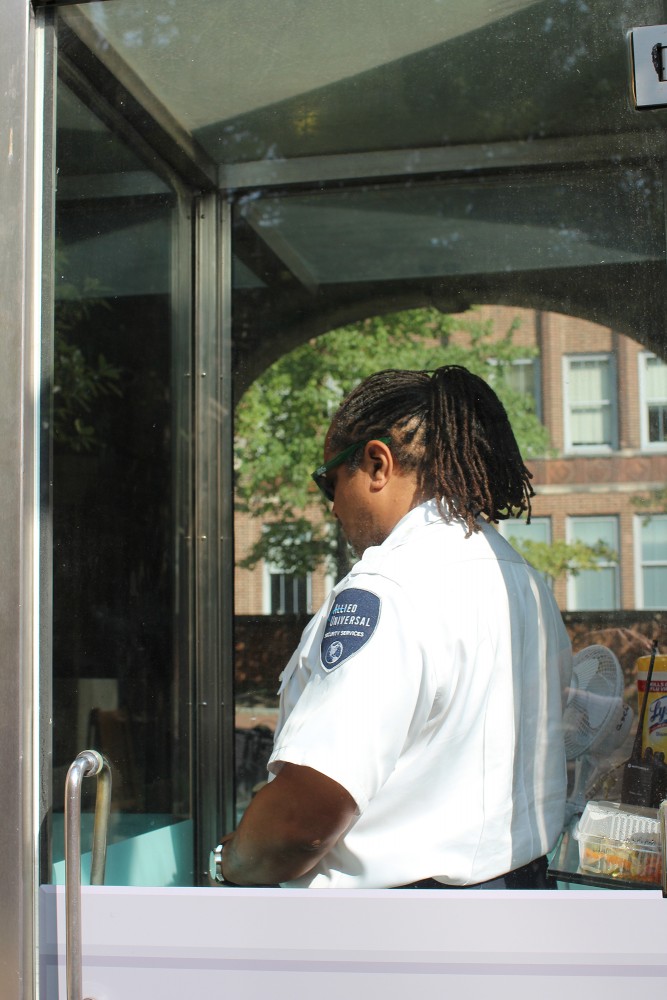 Four boys holding sleeping bags and pillows attempt to enter the Quad using only their guest passes. Terrell reminds them that “if you have a guest pass, you need your host to get in.”

They explain that their host is asleep, and inquire whether one of them can go retrieve him while the others wait outside. Terrell says no, because, like he just said, if you have a guest pass, you need your host to get in. They ask if Terrell can go to their friend’s room and wake him up for them.

Watching Terrell explain to these boys exactly how either of those solutions would defeat the purpose of his job is frustrating, but all he can do is remind them they need their host to get in. There must be a theme this evening, because a girl in a yellow t–shirt stumbles up to Terrell with the same request just forty minutes later.

“Hi, so, um, I don’t have my pass on me, and my sister who goes here isn’t picking up her phone,” she says shakily. “Can I go in and get her? Please?"

Why weren’t they together? “Well, obviously we were,” explains the girl, “But I went to hang out with this guy, and so now I think she’s asleep in her room.”

A group of girls clad entirely in black shuffle out of the gate. Max and I look at each other in agreement: Friday night is here.

Less than ten minutes later, a student approaches the security desk and asks for a Band–Aid. Max reaches into one of his three bags and produces a first aid kit with a collection of different sized Band–Aids inside.

“This is why they call me ‘Inspector Gadget.’”

In his bags, which together weigh about 80 pounds, he has just about everything: phone chargers, lotion, binoculars, tape measure, even a Breathalyzer (he’s never had to use it).

“I carry all of this for the people in the Quad, because you never know what they need,” he explains.

A group of party–goers thank Max for wishing them a safe and fun night. One of the girls looks back at her friends and says, “That’s the Quadfather.”

There’s something special about a freshman party group and their desire for constant companionship and a sense of urgency to achieve it. One student hustles by and tells her friends, “I’m so excited to dance.” Another group navigates a futon through the Hill doorway. Though wildly dissimilar trajectories, both are quintessential college experiences, tinged with the newness of freshman fall. It’s these quiet moments that the security guards are privy to, small milestones they observe as they silently watch us grow up.

A mix of late night studiers and drunken early retirees start to trickle in. A drunken girl exclaims that she lost her PennCard. She finds it right next to her water bottle on the ground.

Mrs. J*, a Hill regular, takes over Erika’s shift. “All my life I’ve done things in twos,” she proclaims. Besides her job as a security guard, she owns a daycare and is working towards opening up a charter school. Despite her many other involvements, Mrs. J reminds me that this job is especially important. In the absence of parents, it’s her job to keep kids safe. She never shows that she’s tired. She sits by and watches the freshmen make their way home.

Freshmen return from their nights out toting Wawa bags and water cups. How many freshmen does it take to get a PennCard reader to work? Apparently five.

Five minutes after they figure out the mechanics of the PennCard readers, a couple walks in. The girl is wearing the guy’s sneakers, as he walks barefoot, holding her heels.

Half an hour later, Mr. B declares, “I’m half junk food, half cigarettes.” It’s time for his smoke break.

From now until 5:00 a.m., the night shift creeps on at a stagnant pace. Students trickle in from their festivities, some walk their friends home and return, Hill College House becomes a ghost town, stripped of the buoyancy it had ten hours ago when the freshman swamped hte entrance. The soft reverberating hum of Mr. J’s motown playlist is the only noise that reverberates through the space.

One. More. Hour. The only people coming in and out are staff members and athletes. The sun pokes through the giant slatted windows, and sleep is starting to get the best of me.

* Indicates that a name has been changed.

Andreas Pavlou is a junior in the College. He is the Vice and Virtue Editor for Street.

Haley Weiss is a senior in the College. She is the Ego Editor for Street.