My journey to realizing that my clothes do not define me.

At 8:15 PM on a Wednesday, I stepped outside of Du Bois College House. It was a little mild for February, but I wore a heavy brown parka nonetheless. I made sure not to zip it up to show my fit: yellow Timbs, gray sweats, royal green sweater, and a matching, velvet du-rag. To top it off, a pair of diamond-studded earrings accentuated my look. I felt like a ‘Bronx n***a,’ and it was sensational amongst the mundane crowd of black Canada Gooses and dirty, Veja sneakers.

With a board meeting starting rather soon, I walked down 40th Street and made a left on Sansom to my friend’s house. I had left my backpack in my dorm because the meetings were rather chill, and nobody really used their laptop. I passed behind the Penn Police Station, searching for the address numbers on what appeared to be a row of identical houses.

When I got closer to my destination, I spotted a line of people exiting through the door next to my friend’s. I could tell they were Penn students because it was club formal season and they looked sharp for a Wednesday night. I locked eyes with a white guy in a suit as I approached the communal front steps. Immediately, he turned around and hurriedly said, “Yo! Close the door, close the door.” He looked at me again and rushed down the steps, ushering people into the bus as someone shut the door behind him.

I looked away and knocked on my friend’s door. “Hey, Wyatt,” he greeted me. “We’re still waiting for a few people, come in.” When I finally exhaled and sat on my friend’s couch, I realized what had happened: he profiled me. With simply a look, that person assumed I was a threat to him and his friends’ safety. I looked down at my lap not knowing what to think. He could be in one of my lectures, one of my comedy shows, one of my friends’ parties — pretty much anywhere.

I wondered, was it me? What about me made him feel that way? Then I took a closer look at my outfit. Because I was walking while “hood-adjacently” Black, he felt the need to close his door. It was absurd. I was tired of being perceived as a threat. Whether it was my tone of voice, my expressions, or my dress, people always felt intimidated. I felt like a monster, one that would never blend in at Penn, let alone the professional world. This burden soon became a relentless cloud that hovered over me, reminding me of what people saw. To cope, after that incident, I taught myself a rule of thumb: Make them feel safer and make yourself smaller.

When I learned about the colonial matrix in one of my classes, I started to put the pieces together. The matrix describes how modernity, professionalism, and all the politics of respectability were designed to build "Western civilization by celebrating its achievements while hiding at the same time its darker side, ‘coloniality,'" according to Duke University professor Walter Mignolo. Coloniality, “names the underlying logic of the foundation and unfolding of Western civilization from the Renaissance to today of which historical colonialisms have been a constitutive, although downplayed, dimension." When my friend straightened her hair to rush a so-called “multicultural” sorority, coloniality won. When a student at the barbershop hesitated to get a slit in his eyebrow because of how it’d affect his prospect for being recruited, it won again. And when a white man’s fragility made me stop dressing authentically to who I am, it buried me along with everything I stood for.

Experiences like these chip away at the souls of people of color, especially those like myself who deviate from white, cis-male, Christian heteronormativity. By refusing to conform to current standards of modernity, professionalism, and respectability, we assert our individuality over the matrix and decolonize our existence. Some time after being racially profiled, I gathered the courage to continue dressing as I pleased, even in my classes, my work-study, and other elite spaces.

Now in my final semester at Penn, I still carry the lesson I learned that night. Although I can’t remember that white guy’s face, I’ll never forget his words. I still pray for the day when our paths meet again so that I can show him I am much more than the threat he took me for. 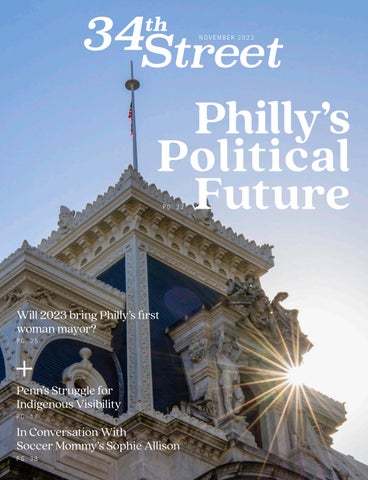